A Brief History Overview
The Shark River Beach and Yacht Club was formed on January 29, 1971, as a result of a merger of the Shark River Yacht Club and the Shark RiverHills Beach Corporation. The club is incorporated under the laws of the State of  New Jersey as a non-profit corporation and is governed by an elected Board of Governors.

Shark River Hills Beach Corporation
The Shark River Hills Beach Corporation, originally know as the Shark River Hills Beach Association was formed in 1952.  During the late 1940s and early 1950s, the current property was being used as a private bathing beach for Shark River Hills residents, supported by fees from bathing badges. A small stand existed that offered ice cream and small food items.  In 1952, the property was acquired from the township for $3,000 which was raised through donation from Shark River Hills residents who became the founding members.  The club developed into a family oriented group that hosted a variety of events including barbecues, beach parties, swim meets, water ski competitions, boat races and teen dances.  In 1953, a boat area was established; the original fleet consisting of 12 boats.  During the 1960's financial pressures mounted due to limited income from the short seasonal operation of the club.  In the late 1960s, the Beach Club considered a proposed merger with the Shark River Yacht Club, formalizing the merger in 1971. 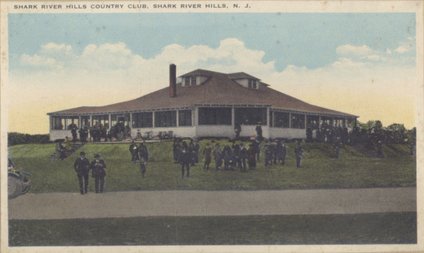 The Shark River Yacht Club then developed an extensive water sports program with an emphasis on adult sailing and instructional sailing programs for youngsters.  A fleet of 8 foot wooden prams were built by the members for use in the youth sailing program.  Weekend sailing regattas were held periodically for one design sailboats with participants from as far away as Boston, MA.  Throughout the years, regular club races gave birth to perpetual sailing trophies which are still raced for and awarded today; they are on display in our trophy case.

In 1965, interest in the sailing program flourished and the desire for a good one-design boat for a novice through advanced junior and adult sailor was developed.  The decision was made to go with the Penguin, and 28 boats were constructed by the members who financed the cost of $231.00 each.  The boats were constructed over the 1965 -1966 winter, several nights a week with the program completing in May of 1966. The Penguin class provided many years of solid learning and strong competition among the members.

At the end of 1967, the Yacht Club management became concerned over providing a permanent home for the club.  The lease on the clubhouse was due to expire at the end of 1968 and negotiations with the landlord were becoming ineffective.  A property committee was established to investigate the availability of a suitable waterfront location.  With no available property meeting the committee's criteria, the committee began serious discussions with the Shark River Hills Beach Corporation to either lease or purchase part of their property or merge the two clubs and construct a new clubhouse and harbor facilities.  With the approval of both the Yacht Club and Beach Club memberships to pursue a merger, the Board of Governors of both organizations met in October 1968.  A three year plan was developed for building the clubhouse and harbor, and the combined boards voted to approve the merger.  During the three year period, many joint meetings and social affairs were held, bringing the two clubs closer together.  A constitution and by-laws was drafted and approved and on January 29, 1971 the new club was duly incorporated as The Shark River Beach and Yacht Club.